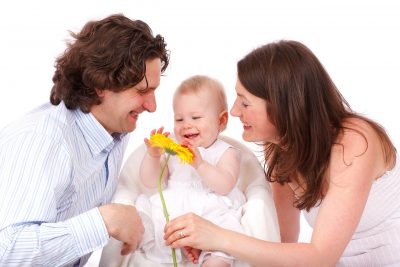 If you’re anything like me, the first thing you wanted to do when you had your child (or children) was to hold them. We may not have been aware of the link between social skills and language development but, instinctively, most new parents are drawn to keeping our child close and interacting with them regularly. In fact, for the first several months, it’s doubtful my kids ever touched anything but a lap!

We all know that human contact and interaction is crucial to babies’ physical and mental well-being – that they will not grow and thrive without it. We know that hugs and skin-to-skin contact boost serotonin levels. And we’ve heard the stories of children who grow up in orphanages or neglectful environments that develop behavioral issues or, at worst case, can even die if they’re not held.

A new study by The Institute for Learning & Brain Sciences, an institute that focuses on understanding children’s development during their early years, have demonstrated that “gaze shifting” is linked to a baby’s ability to learn new language sounds for the first time. This study is published in the current issue of Developmental Neuropsychology.

Gaze shifting, or the realignment of focus to bring an object of interest into the center of the retina, or the area of the eye with the highest receptor density and visual resolution, was linked to a boost in the brain response indicating language learning when toddlers were engaged with a foreign language tutor.

“Our study provides evidence that infants’ social skills play a role in cracking the code of the new language,” said Patricia Kuhl, co-author of this study as well as co-director of I-LABS. “We found that the degree to which infants visually tracked the tutors… was linked to brain measurements of infant learning, showing that social behaviors give helpful information to babies…”

The study brought 9 1/2 month old babies from English-speaking homes to foreign language tutoring sessions. Over the period of four weeks, the babies had 12 “lessons,” in which the tutors read and interacted with them while speaking Spanish. At the end of the study, the results showed that the more gaze shifting an infant did, the greater their brains’ responses were to Spanish language sounds.

You can watch their video below.

A 2013 study partially supported by Autism Speaks found that “infants who go on to develop autism take longer to shift their gaze between images than do infants who develop normally.”

While the earlier study used a computer monitor to display images rather than human tutors, they did determine that those infants diagnosed with ASD at 25 months had a slower gaze shift at 7 months.

I-LABS’ study further indicates that “Social interaction also plays a role in learning at the phonetic level of language.” While infants can learn phonetically from 1- to 2-minute presentations, social context – the cues and interaction possible with a live person – boost the learning of phonemes, or the distinct units of sound within a language.

But what is the best way to interact with your child? Read to them. Talk to them. Mimic their sounds and expressions. Gaze at them. Tell them the names of things and emotions. Make connections for them.

Most of all… Love them.