The Start Of An Amazing Adventure – Aulexic’s Official Launch Party

It’s been an exciting time at Aulexic. On Saturday, May 23rd we launched both the publishing house and our first three titles in the P.I. Penguin series. A few days before the event was featured in the Serpentine/Jarrahdale Examiner newspaper. It’s so great to see Joshua’s big smiles. The photographer put him so at ease and although we still didn’t have our final edition prints it was fun to see the way the photographer made the early proof copy beautiful. All of the photos looked great and the one they used in the article really draws the eye and shows you a boy who adores the books he’s created. 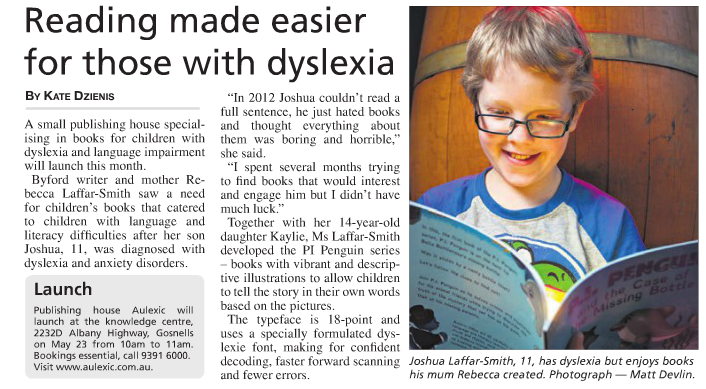 Saturday started like any other day, except it wasn’t. Even Josh was riding the high of knowing we had something exciting happening that day. We’d carefully prepared him to expect lots of people and talked about why having lots of people there is a positive thing that should excite us. We loaded the car with boxes of books, platters of foods, our big pull-up banners, and the various tech and sundry to make the day go off without a hitch. Admittedly, we were running a little late to get the hall set up in time but thankfully lots of hands pitched in to get things going. The wonderful library staff sorted us out and loyal friends and supporters arrived early to help with the finishing touches.

When guests started arriving we were almost ready. Children started colouring and drawing and crafting at our big crafts table, other kids settled on our mat right up front, people mingled around the food and drinks getting refreshments and making themselves comfortable. I was nervous, and excited, oh, and did I mention? Really, really nervous.

The wonderful branch manager, John, introduced me to the audience and I began doing my thing. I was still nervous, but I was glad I’d done my prep work. I had prepared my slides and knew my stuff. I talked about Aulexic, why we’re doing what we’re doing and why our books are great for kids like Josh who have language and literacy difficulties such as dyslexia, specific language impairment, and even autism. Everyone seemed really interested and engaged and it was great to see the warm reception from teachers who had come along looking for ways to support their resistant reader students.

Then, before the children could get restless it was time for a story. Reading P.I. Penguin and the Case of the Missing Bottle was a lot of fun and seeing the beautiful illustrations up on the big projected screen was great. Everyone was absorbed and even the youngest ones in the audience seemed fascinated. Little Daisy up front called out the animals as they appeared. She was enthralled and she’d already heard the story a dozen times before. When the story came to a close it was time for a short break, a drink, a snack, and a chance to let the story be special in our minds before diving into the next part, how the story came to be. 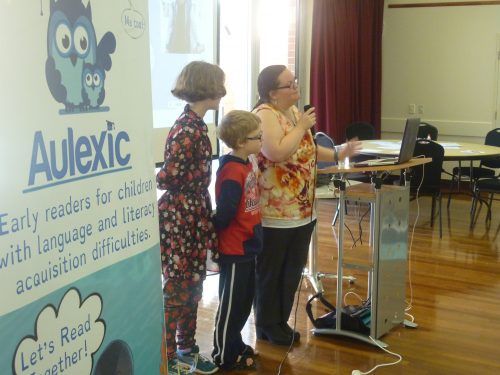 I think a lot of people find the creation process fascinating. Writing books is a little alchemy and magic blended into wonder. But obviously it’s really just mostly a lot of hard work. I showed the process broken down step by step and showed how each part depended on the teamwork of not just the three collaborative writers but also the illustrator and the layouts and the printers. Books don’t happen without an army of hard workers all fighting for the same vision.

We closed up the hour with some great questions from the audience and then book sales and signing. Kaylie and Stephanie both ran the checkout like pros and Josh was a masterful young author, keenly writing his name over and over and over again. It’s the most I’ve seen him eagerly handwriting in a long time. We rounded off the day by packing up, having a quick lunch then spoiling the kids by heading to the swimming pool when everything was put away at home.

All up, the launch was a wonderful experience. It felt like a momentous step from the dreaming and planning we’ve been doing for months, launching us into the action stages. We’re officially established now and the coming months are a time for building and growth. We’ll take this foundation and evolve the groundwork into a solid, functional, and beautiful playhouse for all children. Lets foster a love of reading for every generation. And lets do it together!