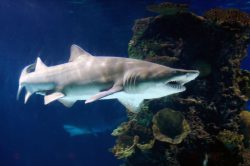 This week was scary and exciting! We learned some truly bizarre things as we explored Grey Nurse Sharks. As with our last Friday’s Fun Facts, we’re hanging with the fishes and there are some fascinating facts we’d love to share with you.

Like other fish, grey nurse sharks breath through gills positioned just before the pectoral fins. These beauties have five gill slits on each side of their bodies. They also have three rows of teeth in a gaping maw that never completely closes. Male grey nurse sharks have claspers behind the pelvic fins but females don’t. These swimmers are silent and deadly in the water. They are able to swim with powerful force or, by swallowing air at the surface, they have a degree of buoyancy control that allows them to glide and hover in the water.

The way grey nurse sharks breed blew our minds. It’s both awesome and gruesome but amazing.

Female grey nurse sharks have two uteruses! TWO! When they mate, the male grey nurse shark bites the female, gripping her tightly as he uses his claspers to impregnate the female. The female then stores the sperm in her uteruses while her ovaries produce eggs. The fertilised eggs grow inside the uterus, but that’s when things get really fascinating. The embryos are ovoviviparous, meaning they hatch inside the uterus and aren’t connected to a placenta for food. Instead, the most well developed of the foetal sharks eats its brothers and sisters. This is called inter-uterine cannibalism. Then, over the following months of gestation, it will continue to eat infertile eggs inside the uterus. This is called oophagy! Eventually a live pup is born from each uterus giving grey nurse sharks a litter of two every breeding season.

Grey nurse sharks only breed once every two years. A pup is about one metre long at birth and will grow to between 2.2 metres and 3.6 metres, weighing in at up to 160 kilograms, as it reaches maturity. That’s twice as big as a human being! Males are mature at about four to six years while females reach maturity a couple of years later. They can live about forty years in the wild but tend to only live approximately fifteen years in captivity. The limits to their litter size, breeding frequency, time to maturity, and life span have contributed to their dwindling populations.

Baby grey nurse sharks are already pretty deadly and clearly carnivorous. After all, those sharp, pointy teeth helped them devour their siblings while in the womb. As they grow they continue to feast. They chomp on boney fish, squids, stingrays, and crustaceans such as crabs and lobsters. They’ll even eat other sharks! 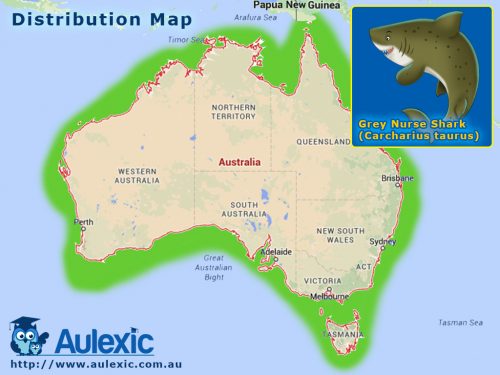 Grey nurse sharks are at home in subtropical and temperate waters off the coast. In Australia, they are predominantly found on the continental shelf of western and eastern coastal waters. They are primarily bottom dwellers, with some reports of them swimming as deep as 190 metres below sea level. Normally, however, they linger at depths of 10 to 40 metres near sandy-bottomed gutters and rocky caves as well as inshore reefs and islands. Sometimes they are found at depths of 5 to 30 metres above wrecks or pinnacles.

Another fascinating thing about grey nurse sharks is they tend to come together when it’s time to breed and over the nine to twelve months of gestation. When the babies are ready to be born, they move to pupping grounds and remain there for one to two years before returning to the aggregation site again to breed. Immature sharks don’t join the mature sharks when they come together, remaining in separate coastal regions as they grow.

Grey nurse shark distribution has been narrowing significantly. While formally found in coastal waters off the shore of most continents, and all around Australia, populations have declined. They now have significantly smaller habitats. The grey nurse sharks near Australia have branched into what appears to be two distinct strains, an east coast and a west coast species.

Despite being deadly predators to other sea life, these beautiful, docile beasts have been significantly impacted by humans. Mistaken for dangerous man-eaters, they’ve been the target of culling. They were hunted near to extinction during the 1950s to 1970s. They also fall prey to commercial, recreational, and spear fishing. Although a protected species, they can be subject to incidental or illegal capture and shark finning. They can be hurt or killed in protective beach meshing and bait traps used in shark control activities. They can also be disturbed by shark deterrent devices such as those that emit electronic signals.

Thankfully, there are some wonderful protective efforts in place to reduce our human impact on the future welfare of these beautiful animals. There are restrictions to diving, fishing, and underwater ventures within certain protected areas around Australia’s coastline with hefty fines in place for lawbreakers. In Western Australia, there are a series of criteria to assess and minimise threats to grey nurse sharks in our coastal waters. Of course, one of the best ways to help protect any of our wildlife is to better understand them and respect their place in nature. 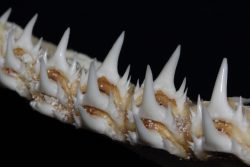 I heard sharks bite people, is that true? 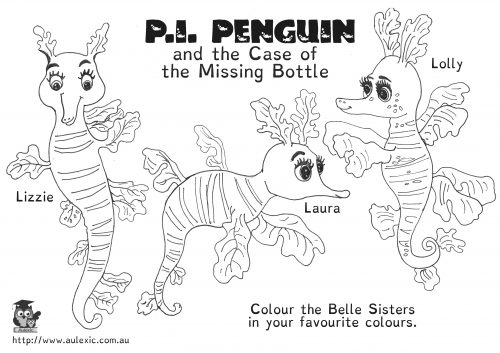 If you love marine animals, our Monthly Colour In Competition features the wonderful marine animal colour ins, including this trio, Lolly, Lizzie, and Laura Belle, the leafy sea dragon sisters from P.I. Penguin and the Case of the Missing Bottle. Grab your pencils, crayons, or crafty things and enter the competition for your chance to win any of our P.I. Penguin books!
And Remember!

While we were learning about Grey Nurse Sharks we came across some excellent resources and references.

Footage from inside the uterus of a grey nurse shark as embryonic shark eats its siblings (graphic footage). (2.5 minutes)
https://www.youtube.com/watch?v=ZrqgPjZ07Ts

Previous project The Brain And Language Development: How to Support Your Child’s Early LiteracyNext project The Value of Labels: ADHD, Dyslexia, Autism, and Other Diagnoses

The Amazing Brother That Inspired My TEDx Talk

Forever Loved: Of An Autistic Child (A Poem & A Story)