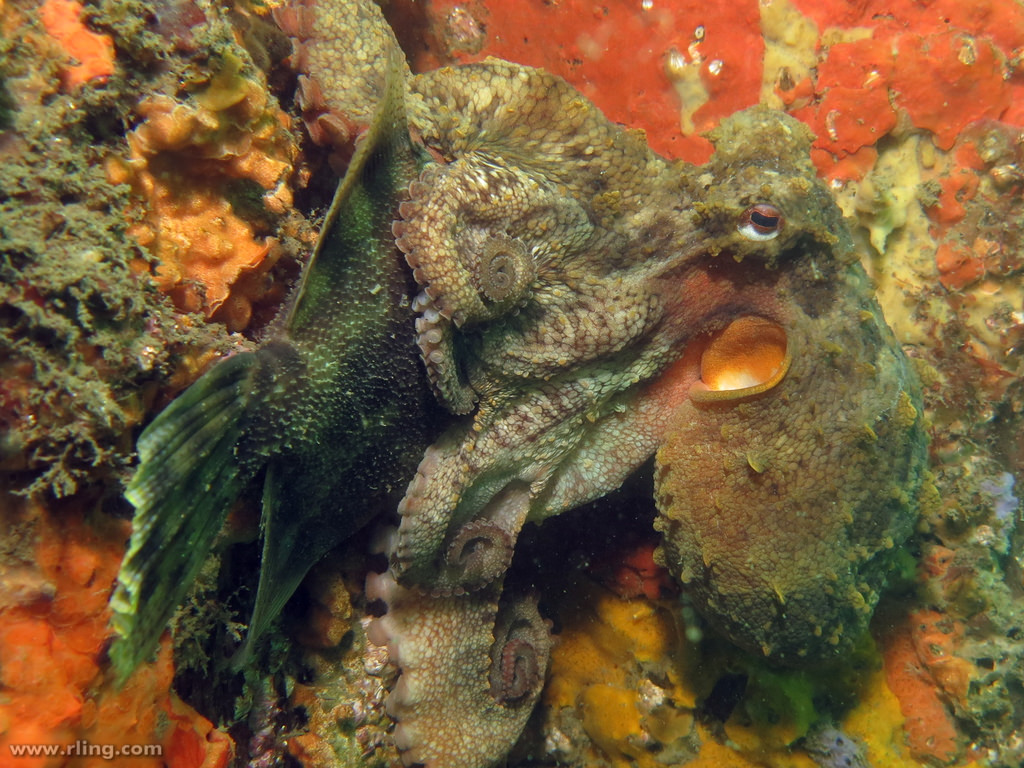 Did you know?
While most animals have red blood, octopuses blood is BLUE!!!

Hands up everyone who has more than two arms! If your hand is up then you need to put it down. Unless you are an octopus of course! The word “octopus” is derived from ancient Greek meaning “eight feet”. So it’s no surprise that these marine creatures are most famous for their eight arms (or should that be legs?). However, what they really should be famous for is their brains! Octopuses are surprisingly clever and even have their own unique personalities. They have been known to solve puzzles, figure out mazes, play with toys, and even teach each other how to problem solve!

This week we will be learning about one species of octopus in particular, the Octopus tetricus! Also known as the gloomy octopus. Don’t let the name fool you. The gloomy octopus isn’t really gloomy at all and has some pretty incredible abilities.

Octopus tetricus are normally a mottled brown, orange and grey colour with big, white eye irises. They have an orange rust colour lining the underside of their tentacles, which are covered in white suckers. Gloomy octopus don’t always look like this though, they are able to change colour using their incredible camouflaging abilities! Their bodies are covered in specialised cells called chromatophores. These cells are filled with coloured pigment and, by expanding and contracting these cells, the octopus are able to change the colour of their skin and blend into their environment.

Their warty bodies and tentacles also help them to mimic the rock faces and seaweed that they hide in. While these guys aren’t an extremely large species, they certainly aren’t small! They have a maximum body size of 60 to 80 cm and a massive tentacle span of up to 2 meters! On the underside of their body, directly below the head, octopus have a sharp beak, used to bite their prey and crack open hard shells. 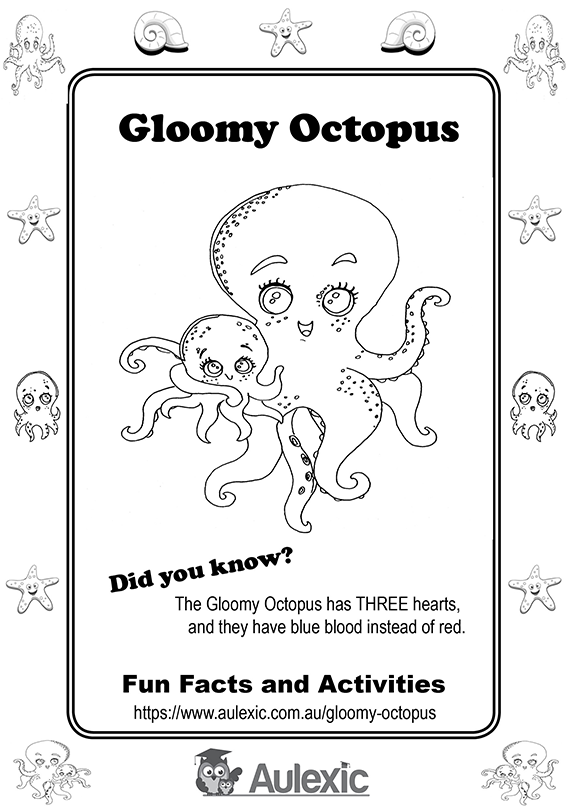 Octopus tend to be solitary animals that like to lurk inside their lairs during the day and come out at night to hunt. Crustaceans, like crabs and lobsters, make for a tasty octopus treat. Bivalves, like mussels and clams, are also a favourite. Gloomy octopus will even grab and munch down small fish if they can catch them. It is easy to spot an octopus lair (if you know what to look for!). Octopus create a fortress at the entrance by scattering the shells of their eaten prey outside of it.

When the octopus is fully grown, they find another octopus to breed with. The mother octopus lays up to 15,000 eggs on a rock where they will remain under her watchful eyes until they hatch. The mumma octopus is the ultimate giver, she guards and watches over her eggs until they hatch. During this time, she will not even hunt and eat! Instead, she remains close and gently wafts fresh water over the eggs to facilitate oxygenation and prevent any algae from growing on the eggs.

When the eggs hatch, the baby octopus are so tiny that they float around in clouds of plankton. This is a very dangerous time for the babies as lots of sea creatures eat plankton! Once they have grown up a little bit, the little octopus will return to the rocky and sandy sea floor to begin a lifetime of hunting, scavenging, and hiding. When the octopus are around three years old, they find a mate and the breeding cycle starts again. 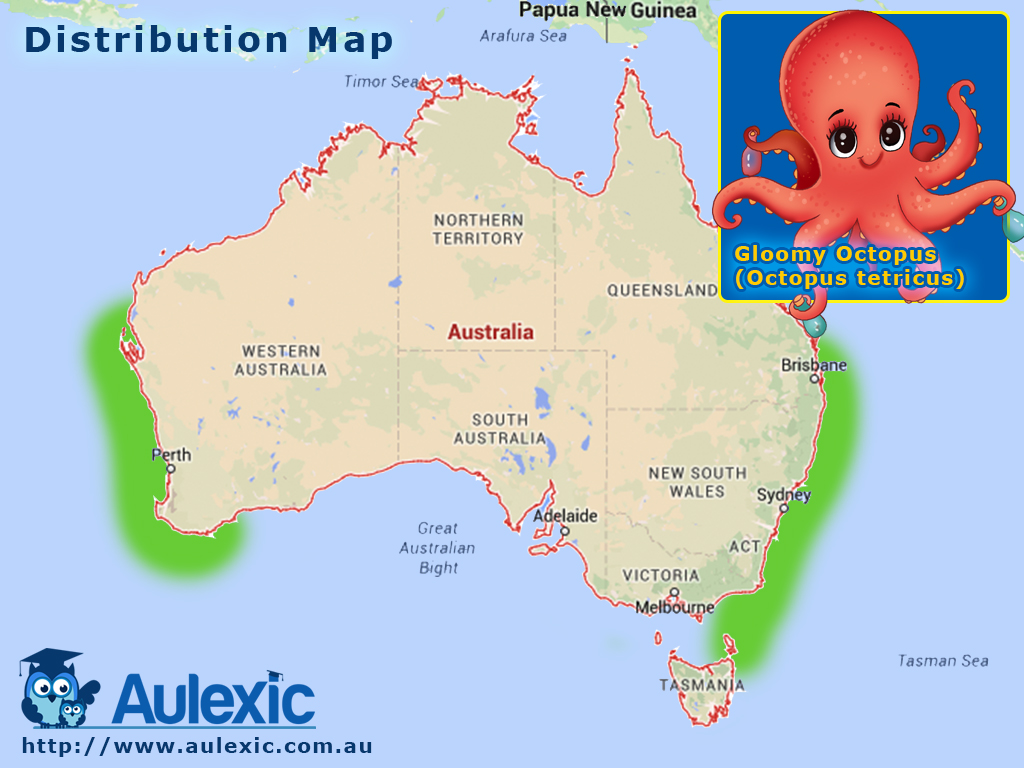 Gloomy octopus spend most of their time chilling out in and around rock crevices (especially during breeding season) or lurking around in soft sediments like mud and sand.

The gloomy octopus is also known as the Common Sydney Octopus but it is not only found around Sydney and Australia’s East Coast. The gloomy octopus has also been found in West Australian coastal waters as far north as Exmouth and as far South as Esperance! Since these octopus aren’t typically found in South Australian, Victorian, and Tasmanian waters, some scientists suspect that the Octopus tetricus found on the West and East coast, could actually be two separate species or subspecies.

Octopuses are extremely intelligent and are usually able to avoid predators by camouflaging and hiding. However, they sometimes fall victim to large marine mammals such as fur seals, dolphins, and whales. They are also considered a tasty snack by fish such as sharks and eels. Sometimes octopuses will even eat each other! Luckily they have a couple of tricks up their tentacles! – They are able to drop a tentacle off in order to escape the clutches of a predator. If that’s not enough, they are also able to squirt a cloud of ink. This ink is so toxic that even the octopus needs to swim away from it – fast! The ink temporarily blinds the predator, allowing the octopus’s quick get away.

The IUCN Red List has not assessed the gloomy octopus population, and it is generally assumed that the population is not threatened. Octopuses are such cheeky and clever critters that they have a habit of sneaking into fisherman’s lobster pots and munch up all the lobsters and crabs before slipping out again. This naughty habit has historically resulted in some of them being accidentally caught as fishing by-catch and being used/sold as fishing bait. Increasingly, over the past few years fisherman have turned their attention to fishing these octopuses themselves and have begun to sell them as as food. It is important that the population begins to be monitored and assessed by marine biologists to ensure they are not being over-fished.

It is believed that human driven climate change is also having an effect on the gloomy octopus. These dynamic little creatures are now starting to make their way down from the Australian East Coast into Northern Tasmanian waters, an area they have never been found before. This could be due to climate change driven differences in the water conditions allowing them to survive in areas they previously could not. 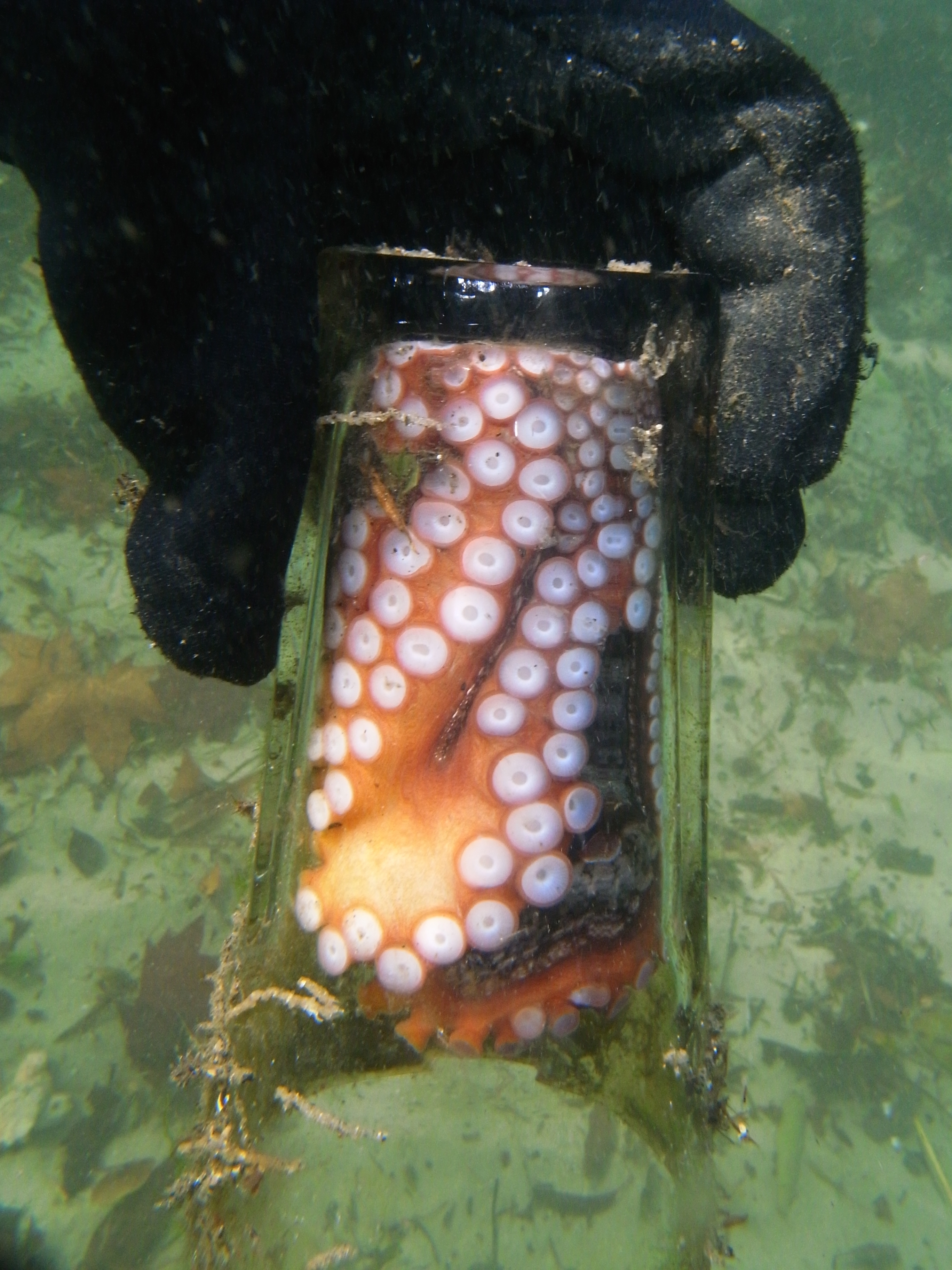 What do you call an octopus when you have more than one? Octopi?

Do octopuses have a skeleton? 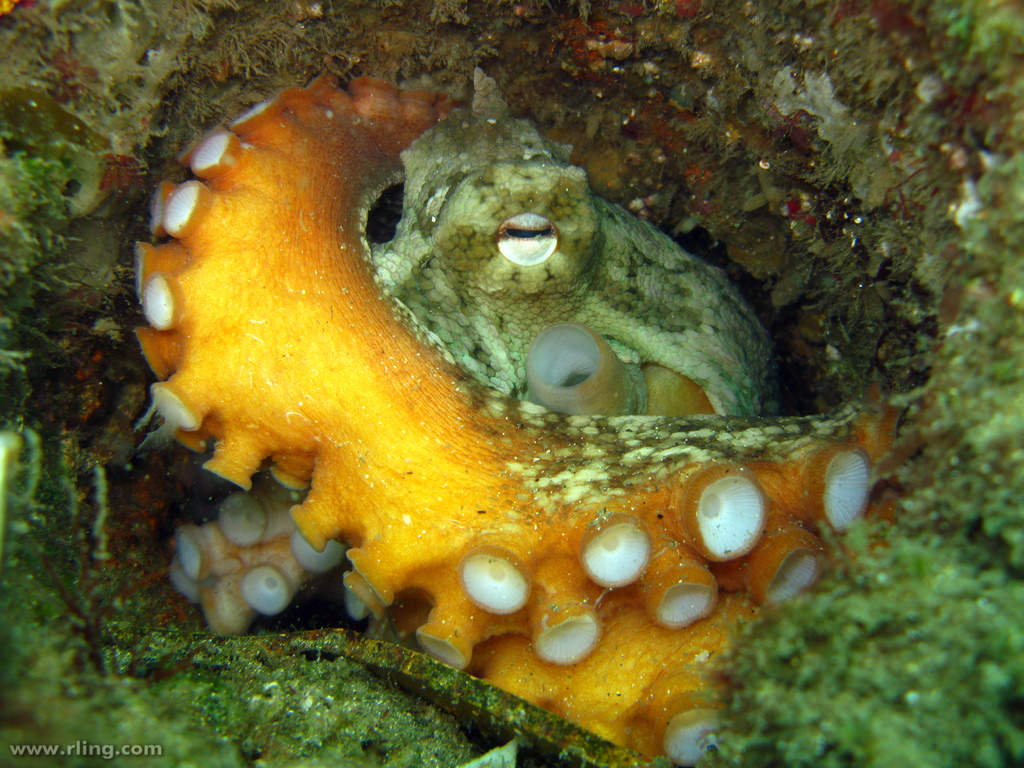 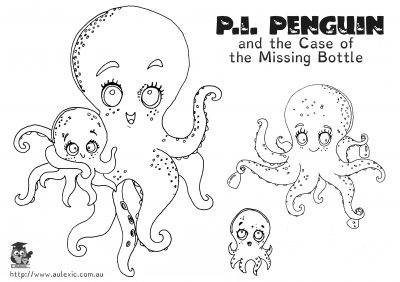 If you love octopuses, our Monthly Colour In Competition features octopus colour ins, as well as other animals from the P.I. Penguin series. Grab your pencils, crayons, or crafty things and enter the competition for your chance to win any of our P.I. Penguin books!
And Remember!

While we were learning about the gloomy octopus we came across some excellent resources and references.

Fighting octopuses may be using shells as weapons. (30 seconds)
https://www.youtube.com/watch?v=MeuSwoXxRbs

Why the octopus brain is so extraordinary – TedEd. (4 minutes)
https://www.youtube.com/watch?v=VLkKiVIBxXU