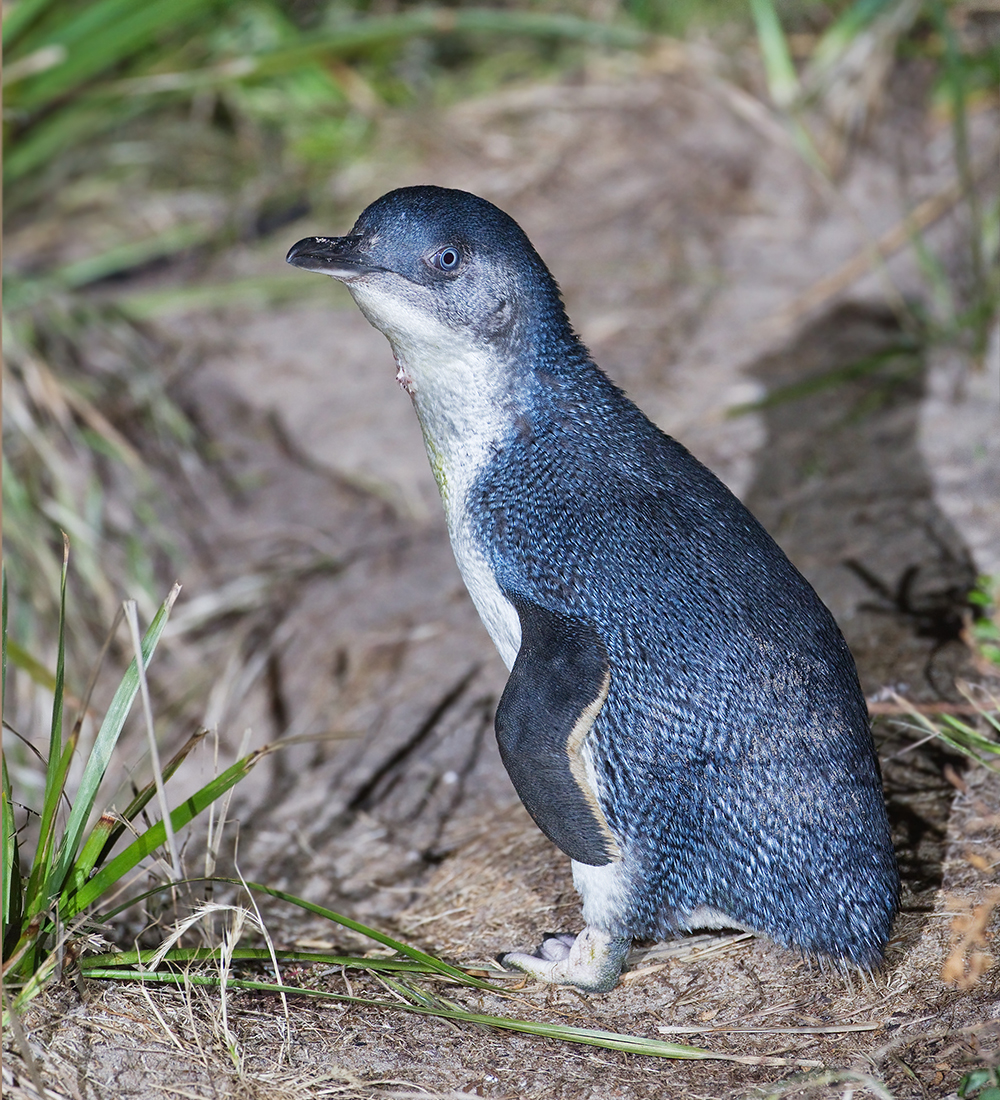 Did you know?
Despite spending most of their lives in the water, little penguins can only hold their breath for two minutes!

Australian Little Penguins are possibly the most adorable penguins in the world. Here in Australia, we are blessed to find them along our southern coastlines. You may have also heard them being called by their other name, the “Fairy Penguin”. Unlike fairies, they do not actually possess any magic powers. But, like fairies, they are very tiny. In fact, they are the smallest of all penguin species.

Australian Little Penguins are also known as “Blue Penguins” but they certainly aren’t bright blue! They get that name from the smart, dark blue-black feathers running down their back, tail and flippers. While these feathers look good, they are also very functionally important. They are waterproof and provide insulation for the penguin so keeps them warm and protected when they swim in the sea. Little penguins have a grey face and a white tummy with pinkish-grey feet.

These dapper little fellows love to eat fish. Their streamlined bodies are perfectly designed to help them chase and catch their prey. Their flippers propel them through the water while their tails help them to steer. They can dart and dive with agile grace as they hunt for fish to feed themselves and their chicks. 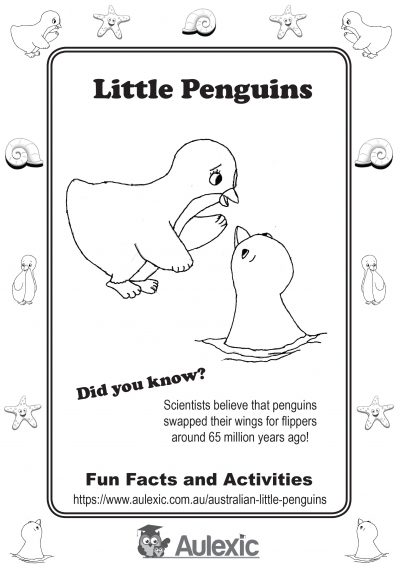 Little penguins are little socialites. They live in groups or colonies called rookeries. These colonies can dramatically fluctuate in size from a couple of penguin pairs to tens of thousands.

Little penguins spend most of their time at sea. They head out into the water before sunrise and don’t returning home to land until after sunset. After sunset, little penguins on the land may gather together to socialize and have a penguin chat with each other. These interactions can be very noisy. Sometimes little penguins don’t come home in the evening at all and spend days at sea, hunting, and foraging.

While on land, little penguins live in burrows to protect themselves from the weather and predators. In these burrows little penguins make nests for their eggs. Once they reach breeding age, at three years old, little penguins usually breed once a year. Once the mother penguin has laid two eggs, both mother and father will take turns incubating them. After 36 days, the eggs hatch and the hungry chicks need to be fed!

For the first 15 days after hatching, the mother and father little penguins take turns either babysitting or hunting. Someone must always stay at the nest to guard the babies. But the babies need food to grow big and strong so one parent must go to sea for fish. The little penguin parents catch and eat the fish until their tummies are full. Then they come back to the nest to regurgitate the food into the chicks’ mouths – Yum! When the chicks are old enough, both parents will go to sea to hunt for fish to keep their little chicks healthy and strong until they are big enough to hunt for themselves.

After 7 to 11 weeks, the chicks are big enough to head out to sea for the first time. Their soft, downy baby chick feathers have moulted and their slick, mature adult feathers are ready to protect them from the wet and cold. No one needs to teach little penguins how to swim and hunt because penguin chicks figure it out on their own! I guess you could say they’re a bird that takes to water like a fish! And now they can swim and hunt for themselves they don’t need to be looked after by their parents any more. Talk about independent! 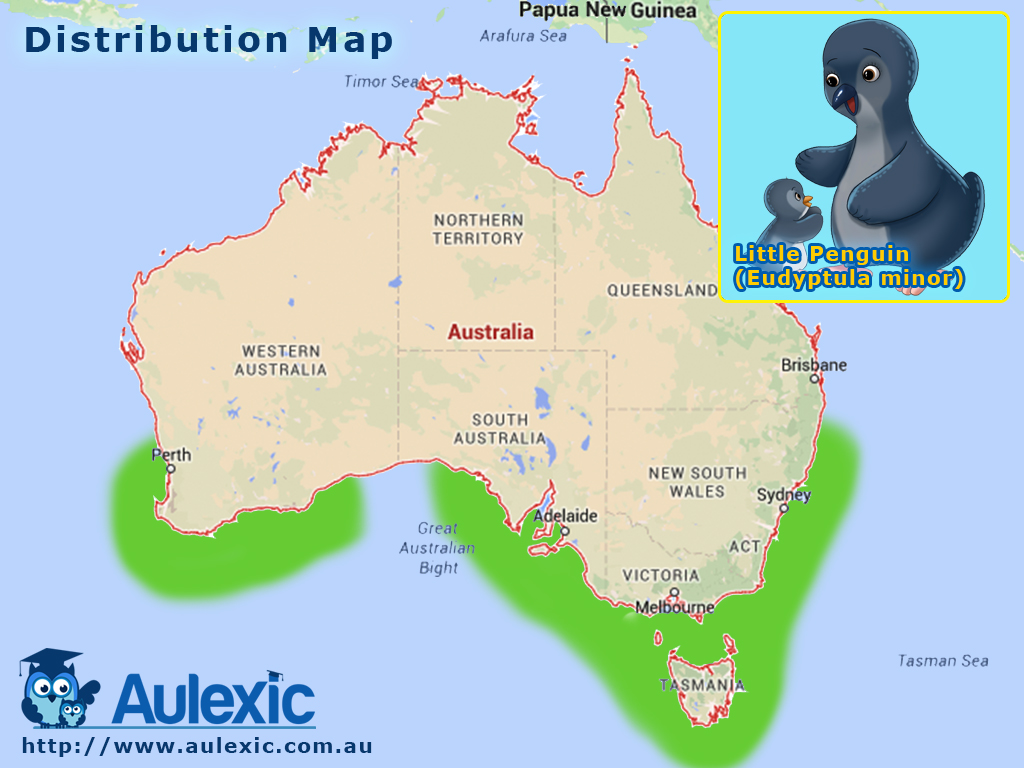 Little penguins are found in cool, coastal waters around the Southern parts of Australia and the waters surrounding New Zealand. One of the most famous colonies of little penguins in the world live on the Phillip Island Nature Parks just 90 minutes drive from Melbourne, Victoria. People visit Phillip Island to see the Penguin Parade as thousands of penguins return to the beach at sunset every night of the year! There is a fabulous series of documentaries, Penguin Island (ABC TV) that shares the experiences of these very special penguins and are fascinating to watch.

Did you know that the Little Penguin is the only penguin species native to mainland Australia? They are well adapted to the cool waters of our southern coast and actually become quite distressed when on land if temperatures rise above 35 degrees Celsius. This is part of what limits their range north to South Solitary Island off Coffs Harbour, New South Wales on the east coast and Penguin Island and the southern-most metropolitan coast of Perth, Western Australia. They also make homes along the cool coasts of New Zealand.

When on land, Little Penguins mostly make their nests in sand dunes. Their burrows are about 60 to 80cm long. But they’ve been known to also make their burrows inside caves or rock piles and even underneath buildings. On Phillip Island, before it was fully restored as a nature reserve, penguins would sometimes even make their homes under and around the houses where people lived on the island. Their main habitats are cool and temperate sand or rocky islands or coastal areas. 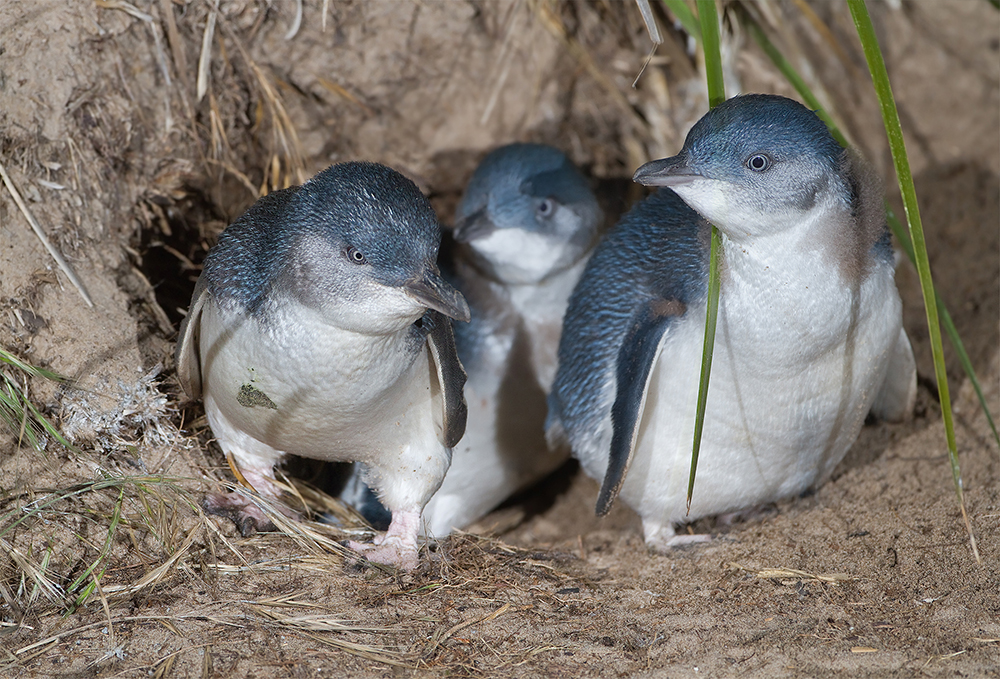 Little penguins are considered to be of “least concern” by the IUCN but their population sizes are currently dropping. For this reason, lots of conservationists are working tirelessly to keep these little guys around in areas where they may be under threat. They’ve been restoring habitats, culling predators, administering first aid to distressed penguins, and so much more.

Natural predators in the sea include sharks and some seal species. On the land, large seabirds like petrels are a potential penguin predator (say that ten times fast!). Arguably, the worst land predators for little penguins are introduced feral animals like foxes, cats, and dogs, which can be devastating for penguin colonies. Conservationists feel that a lot of work must be done to protect penguins from these feral threats. In fact, the film “Oddball“, is based on the true story of a chicken farmer who came up with the idea of using Maremma Sheepdogs to guard and protect penguins. Maremma’s are still used in little penguin conservation today on Middle Island, where the film is set. Which really shows how creative ideas can help save wildlife!

Other threats to little penguins include pollution from careless boat and beach users, oil spills, discarded fishing equipment like nets and hooks, as well as overfishing. While swimming, these penguins are usually within two meters of the water surface and can be accidentally hit by boats. You can help little penguins by always picking up any rubbish you might find at the beach and taking care to “go slow” when driving a boat in penguin territory.

How do can you tell the difference between male and female little penguins?

Why do little penguins moult? 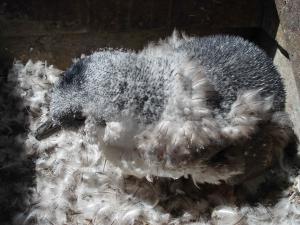 Why do penguins waddle? 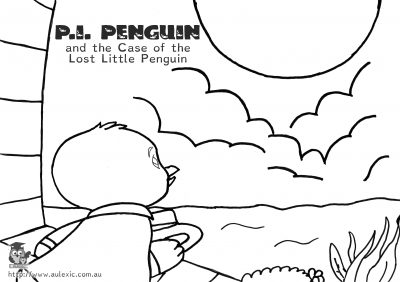 If you love marine animals, our Monthly Colour In Competition features the wonderful creatures including Australian Little Penguins from P.I. Penguin and the Case of the Little Penguin. Grab your pencils, crayons, or crafty things and enter the competition for your chance to win!
And Remember!

While we were learning about Australian Little Penguins we came across some excellent resources and references.

Penguins of the World for Kids from FreeSchool. (6.06 minutes)
https://www.youtube.com/watch?v=O8qilxaBR20