This month Bec J. Smith had some wonderful adventures with P.I. Penguin. Check out what we’ve been up to, where we’ve been hanging out, what we’ve been doing, and see if you can spot a penguin or too! 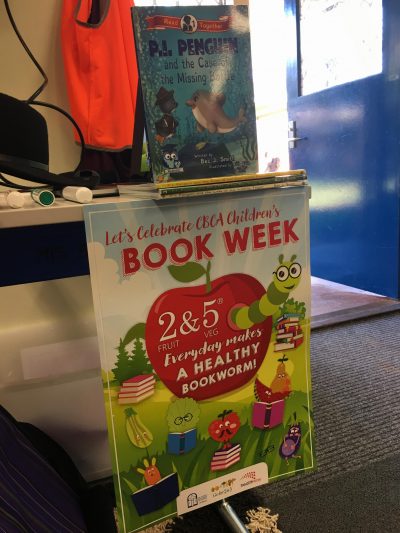 This week, I had the joy of visiting some schools in the City of Gosnells. I delivered my Kids Can Make Picture Books workshop to over 130 children. We started the morning with two classrooms at Maddington Primary School. While I set up the digital display, hooked up my Macbook, and laid out my various supplies, the wonderful Leanne from the City of Gosnells libraries moved aside desks and chairs. We needed plenty for room for the kids to sit and see. They came streaming in from morning fitness, fired up and ready to get to work.

I love presenting the Kids Can Make Picture Books workshop. It’s fun seeing the ideas kids come up with. Every time I present it things are different. It’s interesting to see how the collective minds of children differ from situation to situation. For example, when I presented it to children of African heritage, I noticed that they lean into human characters predominantly rather than exploring fantastical creatures. The kids in the morning class at Maddington Primary had a well balanced mix of animals, fantasy creatures, even some horror and science fiction but did not suggest many human characters. By popular vote we narrowed our brainstormed list down to a main character and fleshed it out a bit more. An electricity breathing dragon!

Once we’d chosen a character we explored and brainstormed our ideas for a setting. Forests, caves, volcanos, enchanted islands, other planets, other dimensions, there were so many places that came to mine and after putting together a comprehensive list we wound it back to select just a couple of settings that would feature in our story. We would build our story on a Dragon Island with a forest and an enchanted waterfall.

Next we took our main character (the electricity-breathing dragon) and put him in his ‘Ordinary World’. Each day he would use his powers to knock down trees in the forest. A fascinating tale unfolded through the six story stages. The dragon lost his powers which was the ‘Inciting Incident’. In ‘Allies and Enemies’, the dragon meets a dragon friend, but he also discovers the one who stole his powers, the Invisible Girl. At the ‘Midpoint’ he learns that the Invisible Girl’s weakness is water. He also learns that she keeps the powers in a special orb that allows her to manipulate the minds of those whose powers she captures. So in the ‘Climax’ the two dragons still away her orb and hide it in a cave behind an enchanted waterfall. When the Invisible Girl tries to reclaim the orb the electricity-breathing dragon electrocutes the water around the cave and defeats the girl. Then, in the ‘Resolution’, the two dragons return to the forest with their powers and live happily ever after. The kids even added a nest with an egg in it to show how the story continues beyond the last page. 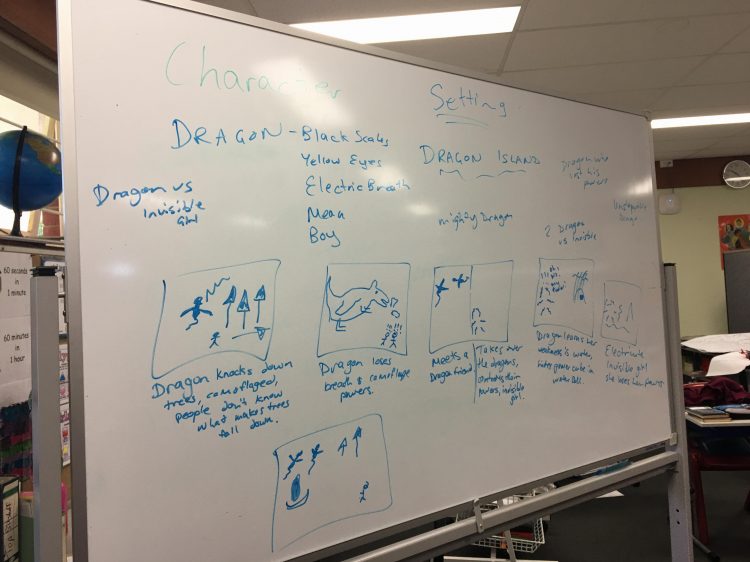 After visiting Maddington Primary School my next stop was the year eights at Thornlie Senior High School. These high schoolers storytelling proved less original so there was added discussion about copyright law. They were also more keyed into world events and suggested some well known names as characters. That gave me an opportunity to talk about defamation laws. When we got down to it, their collective story included some cool pickle rats and bone suits. It even included an epic war full of blood, death, and carnage. After exploring their creative minds with a lot of noise and a silly fun, Leanne and I took a break for lunch before heading back to Maddington Primary School to chat with a different class of students.

When I entered this classroom I noticed with great delight that the walls were adorned with visual guides to story telling. Words like setting and plot and character jumped out at me. In fact, there was even a brainstormed chart of setting suggestions, just like the ones I make with the kids in my workshop. I knew these kids would be keyed into the creative. I knew they would be open to telling some fantastic stories. With that in mind, and because the group was small enough, I changed things up and opted to let each child work individually rather than as a whole group.

The children settled in at their desks and took out their pencils. I handed out my Kids Can Make Picture Books worksheets. We brainstormed ideas for characters together on the board. I was fascinated to discover this class were very much a fantasy-first group of kids. Characters like Serpentine, Chimera, and Giants graced the list along with dozens more suggestions. The settings were equally fantasy heavy but their ideas abounded. They were rich with inspiration. I just know they outlined some absolutely fabulous stories that day. 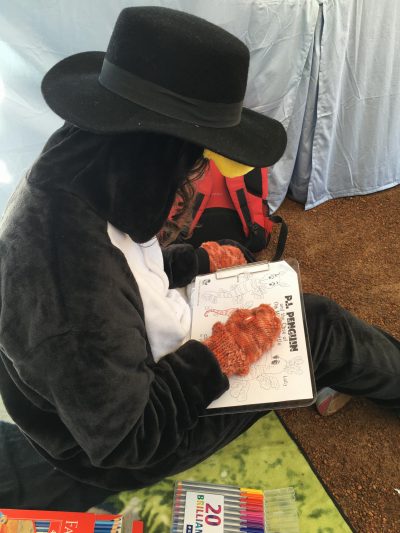 On Saturday, Kaylie and I hung out at the Bedfordale Bush Markets. We’d been invited to give a reading from our P.I. Penguin series. As an eternal night owl it felt odd to be waking up before the sun. Because all three members of the Bec J. Smith trio are light sensitive, we have a recurring joke that asks, “Who turned the sun on?” That Saturday it must have been me and Kaylie because as we pulled up at the markets and began unloading our stall equipment the sun trekked it’s way into the sky.

Kaylie was lucky. She opted to wear our snug, warm P.I. Penguin costume. Check her out as she takes a rest after setting up our stall and spends a few minutes colouring in a copy of our Leafy Sea Dragon colour in pictures. She’s even got snazzy warm gloves to keep her flippers warm. That was my first penguin spotting for the day but some of the kids who visited our stall spied P.I. Penguin keeping careful watch over his books. 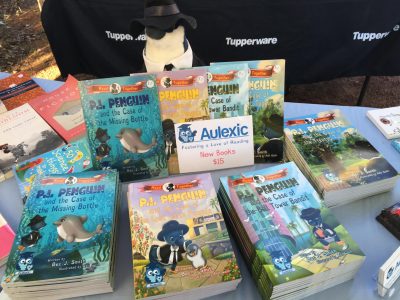 Market stalls are a lot of fun, but they’re also a lot of work. By the time we wound down, packed up, and got home, Kaylie was ready to drop. She groaned when I reminded her we still needed to empty the car. It is never a good idea to leave books in the boot even on a winter day because Australia is never truly cold. Books don’t do well if left in hot cars. But I tell you, we rested well once the work was done that day. 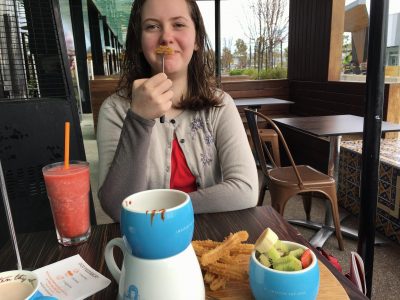 A Quick Sip At San Churros

After a morning meeting, Kaylie and I snuck away for a secret treat. We had time before our errand that afternoon to snack on some tasty chocolate-dipped fruit and churros. Kaylie looks very happy about that chocolatey churro she’s about to put in her mouth.

Finally, we wrapped up the month of adventures by delivering ten P.I. Penguin bundles in Osbourne Park. These were for the fabulous families and teachers at Alpha Family Day Care. I’ve had the joy in the past to present both my Kids Can Make Picture Books workshop as well as some Lets Play With Words sessions to help with the developing language and literacy skills of their kids. One of the things that makes Alpha Family Day Care so awesome is that all of the children who attend are of African descent and either have English as a second language or more rarely are duel-lingual (learning two primary languages from birth). Alpha Family Day Care does a wonderful job of providing these children with opportunities, in addition to their traditional schooling, for language and literacy development. 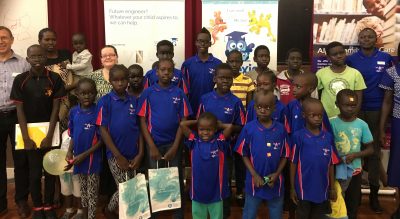 Rebecca with some of the children from Alpha Family Day Care.

After I presented Kids Can Make Picture Books to about sixty of their kids, the day care staff helped the children to carry forward the skills and ideas they’d developed at the workshop. They helped students write, illustrate, and even publish their stories. Peter was kind enough to gift me copies of their creations. It’s such a joy to see children and teachers take up what I’ve shown them and really make something from the seed of creativity I sew on my visits. And it’s wonderful to see the smiling faces of kids who are loving exploring stories together.