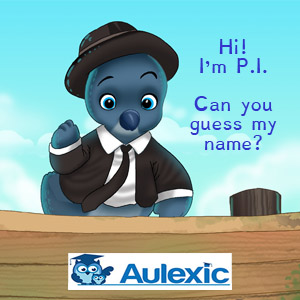 My son LOVES penguins so when we decided to write a picture book for Aulexic it was no surprise that he opted to make our main character a Penguin. We call him P.I.

Want to know a cool fact about his name? He’s called P.I. because he’s a private investigator, but when we brainstormed his stories, Kaylie and Josh thought it would be cool if those weren’t just the letters of his profession but also the initials of his real name!

What do you think P.I. Penguin’s first name is?

Each month we’re giving away a free P.I. Penguin book to our favourite guess so get your naming cap on and see if you can think of a creative name. Remember, his first name starts with P, and his middle name starts with I.